If you haven’t seen it yet, I recommend reading this delightful collaboration between Scott Aaronson (of Shtetl-Optimized) and Zach Weinersmith (of Saturday Morning Breakfast Cereal). As explanations of a concept beyond the standard popular accounts go, this one is pretty high quality, correcting some common misconceptions about quantum computing.

I especially liked the following exchange: 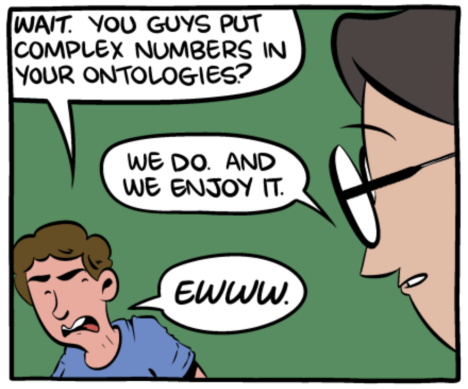 I’ve complained before about people trying to apply ontology to physics, and I think this gets at the root of one of my objections.

People tend to think that the world should be describable with words. From that perspective, mathematics is just a particular tool, a system we’ve created. If you look at the world in that way, mathematics looks unreasonably effective: it’s ability to describe the real world seems like a miraculous coincidence.

Mathematics isn’t just one tool though, or just one system. It’s all of them: not just numbers and equations, but knots and logic and everything else. Deep down, mathematics is just a collection of all the ways we’ve found to state things precisely.

Because of that, it shouldn’t surprise you that we “put complex numbers in our ontologies”. Complex numbers are just one way we’ve found to make precise statements about the world, one that comes in handy when talking about quantum mechanics. There doesn’t need to be a “correct” description in words: the math is already stating things as precisely as we know how.

That doesn’t mean that ontology is a useless project. It’s worthwhile to develop new ways of talking about things. I can understand the goal of building up a philosophical language powerful enough to describe the world in terms of words, and if such a language was successful it might well inspire us to ask new scientific questions.

But it’s crucial to remember that there’s real work to be done there. There’s no guarantee that the project will work, that words will end up sufficient. When you put aside our best tools to make precise statements, you’re handicapping yourself, making the problem harder than it needed to be. It’s your responsibility to make sure you’re getting something worthwhile out of it.

3 thoughts on “Have You Given Your Kids “The Talk”?”