In a few weeks, I’ll be giving a talk for Stony Brook’s Graduate Awards Colloquium, to an audience of social science grad students and their parents.

One of the most useful tools when talking to people in other fields is a shared image. You want something from your field that they’ve seen, that they’re used to, that they’ll recognize. Building off of that kind of thing can be a great way to communicate.

If there’s one particle physics image that lots and lots of people have seen, it’s the Standard Model. Generally, it’s organized into charts like this: 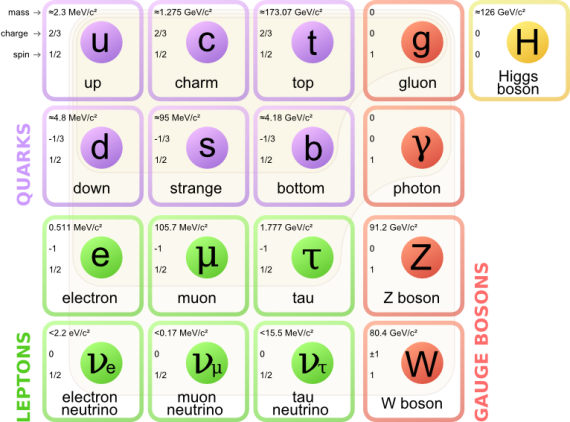 In N=4 super Yang-Mills, none of these particles have any mass, since if supersymmetry isn’t “broken” all particles have the same mass. So where mass is written in the Standard Model table, I can just put zero. The table I linked also gives the electric charge of each particle. That doesn’t really mean anything for N=4 super Yang-Mills. It isn’t a theory that tries to describe the real world, so there’s no direct equivalent to a real-world force like electromagnetism. Since everything in the theory has to have the same charge, again due to supersymmetry, I can just list all of their “electric charges” as zero.

Putting it all together, I get the diagram below. The theory has eleven particles in total, so it won’t fit into a nice neat square. Still, this should be more familiar than most of the ways I could present things.

Over the last week I’ve been working with a few co-authors to get a paper ready for publication. For my part, this has mostly meant making plots of our data. (Yes, theorists have data! It’s the result of calculations, not observations, but it’s still data!)

As it turns out, making the actual plots is only the first and easiest step. We have a huge number of data points, which means the plots ended up being very large files. To fix this I had to smooth out the files so they don’t include every point, a process called rasterizing the images. I also needed to make sure that the labels of the plots matched the fonts in the paper, and that the images in the paper were of the right file type to be included, which in turn meant understanding the sort of information retained by each type of image file. I had to learn which image files include transparency and which don’t, which include fonts as text and which use images, and which fonts were included in each program I used. By the end, I learned more about graphic design than I ever intended to.

In a company, this sort of job would be given to a graphic designer on-staff, or a hired expert. In academia, however, we don’t have the resources for that sort of thing, so we have to become experts in the nitty-gritty details of how to get our work in publishable form.

As it turns out, this is part of a wider pattern in academia. Any given project doesn’t have a large staff of specialists or a budget for outside firms, so everyone involved has to become competent at tasks that a business would parcel out to experts. This is why a large part of work in physics isn’t really physics per se; rather, we theorists often spend much of our time programming, while experimentalists often have to build and repair their experimental apparatus. The end result is that much of what we do is jury-rigged together, with an amateur understanding of most of the side disciplines involved. Things work, but they aren’t as efficient or as slick as they could be if assembled by a real expert. On the other hand, it makes things much cheaper, and it’s a big contributor to the uncanny ability of physicists to know about other peoples’ disciplines.