(My last post had a poll in it! If you haven’t responded yet, please do.)

Earlier this month, philosopher Richard Dawid ran a workshop entitled “Why Trust a Theory? Reconsidering Scientific Methodology in Light of Modern Physics” to discuss his idea of “non-empirical theory confirmation” for string theory, inflation, and the multiverse. They haven’t published the talks online yet, so I’m stuck reading coverage, mostly these posts by skeptical philosopher Massimo Pigliucci. I find the overall concept annoying, and may rant about it later. For now though, I’d like to talk about a talks on the second day by philosopher Chris Wüthrich about black hole entropy.

Black holes, of course, are the entire-stars-collapsed-to-a-point-that-no-light-can-escape that everyone knows and loves. Entropy is often thought of as the scientific term for chaos and disorder, the universe’s long slide towards dissolution. In reality, it’s a bit more complicated than that.

For one, you need to take Elric into account…

Can black holes be disordered? Naively, that doesn’t seem possible. How can a single point be disorderly?

Thought about in a bit more detail, the conclusion seems even stronger. Via something called the “No Hair Theorem”, it’s possible to prove that black holes can be described completely with just three numbers: their mass, their charge, and how fast they are spinning. With just three numbers, how can there be room for chaos?

On the other hand, you may have heard of the Second Law of Thermodynamics. The Second Law states that entropy always increases. Absent external support, things will always slide towards disorder eventually.

If you combine this with black holes, then this seems to have weird implications. In particular, what happens when something disordered falls into a black hole? Does the disorder just “go away”? Doesn’t that violate the Second Law?

This line of reasoning has led to the idea that black holes have entropy after all. It led Bekenstein to calculate the entropy of a black hole based on how much information is “hidden” inside, and Hawking to find that black holes in a quantum world should radiate as if they had a temperature consistent with that entropy. One of the biggest successes of string theory is an explanation for this entropy. In string theory, black holes aren’t perfect points: they have structure, arrangements of strings and higher dimensional membranes, and this structure can be disordered in a way that seems to give the right entropy.

Note that none of this has been tested experimentally. Hawking radiation, if it exists, is very faint: not the sort of thing we could detect with a telescope. Wüthrich is worried that Bekenstein’s original calculation of black hole entropy might have been on the wrong track, which would undermine one of string theory’s most well-known accomplishments.

I don’t know Wüthrich’s full argument, since the talks haven’t been posted online yet. All I know is Pigliucci’s summary. From that summary, it looks like Wüthrich’s primary worry is about two different definitions of entropy.

See, when I described entropy as “disorder”, I was being a bit vague. There are actually two different definitions of entropy. The older one, Gibbs entropy, grows with the number of states of a system. What does that have to do with disorder?

Think about two different substances: a gas, and a crystal. Both are made out of atoms, but the patterns involved are different. In the gas, atoms are free to move, while in the crystal they’re (comparatively) fixed in place. 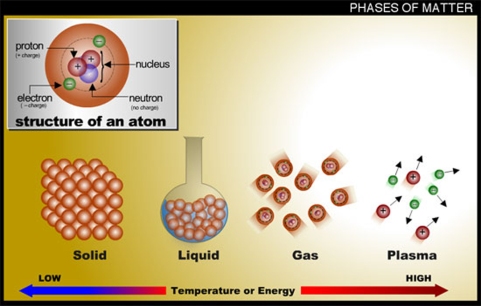 Blurrily so in this case

There are many different ways the atoms of a gas can be arranged and still be a gas, but fewer in which they can be a crystal, so a gas has more entropy than a crystal. Intuitively, the gas is more disordered.

It may well be he has a deeper argument for this, one that wasn’t covered in the summary. But if this is accurate, Wüthrich is missing something fundamental. Shannon entropy and Gibbs entropy aren’t two different concepts. Rather, they’re both ways of describing a core idea: entropy is a measure of ignorance.

A gas has more entropy than a crystal, it can be arranged in a larger number of different ways. But let’s not talk about a gas. Let’s talk about a specific arrangement of atoms: one is flying up, one to the left, one to the right, and so on. Space them apart, but be very specific about how they are arranged. This arrangement could well be a gas, but now it’s a specific gas. And because we’re this specific, there are now many fewer states the gas can be in, so this (specific) gas has less entropy!

Now of course, this is a very silly way to describe a gas. In general, we don’t know what every single atom of a gas is doing, that’s why we call it a gas in the first place. But it’s that lack of knowledge that we call entropy. Entropy isn’t just something out there in the world, it’s a feature of our descriptions…but one that, nonetheless, has important physical consequences. The Second Law still holds: the world goes from lower entropy to higher entropy. And while that may seem strange, it’s actually quite logical: the things that we describe in more vague terms should become more common than the things we describe in specific terms, after all there are many more of them!

Entropy isn’t the only thing like this. In the past, I’ve bemoaned the difficulty of describing the concept of gauge symmetry. Gauge symmetry is in some ways just part of our descriptions: we prefer to describe fundamental forces in a particular way, and that description has redundant parameters. We have to make those redundant parameters “go away” somehow, and that leads to non-existent particles called “ghosts”. However, gauge symmetry also has physical consequences: it was how people first knew that there had to be a Higgs boson, long before it was discovered. And while it might seem weird to think that a redundancy could imply something as physical as the Higgs, the success of the concept of entropy should make this much less surprising. Much of what we do in physics is reasoning about different descriptions, different ways of dividing up the world, and then figuring out the consequences of those descriptions. Entropy is ignorance…and if our ignorance obeys laws, if it’s describable mathematically, then it’s as physical as anything else.

10 thoughts on “Entropy is Ignorance”