The 60’s were a weird time in academia. Psychologists were busy experimenting with LSD, seeing if they could convince people to electrocute each other, and otherwise doing the sorts of shenanigans that ended up saddling them with Institutional Review Boards so that nowadays they can’t even hand out surveys without a ten page form attesting that it won’t have adverse effects on pregnant women.

We don’t have IRBs in theoretical physics. We didn’t get quite as wacky as the psychologists did. But the 60’s were still a time of utopian dreams and experimentation, even in physics. We may not have done unethical experiments on people…but we did have the Analytic S-Matrix Program.

The Analytic S-Matrix Program was an attempt to rebuild quantum field theory from the ground up. The “S” in S-Matrix stands for “scattering”: the S-Matrix is an enormous matrix that tells you, for each set of incoming particles, the probability that they scatter into some new set of outgoing particles. Normally, this gets calculated piece by piece with what are called Feynman diagrams. The goal of the Analytic S-Matrix program was a loftier one: to derive the S-Matrix from first principles, without building it out of quantum field theory pieces. Without Feynman diagrams’ reliance on space and time, people like  Geoffrey Chew, Stanley Mandelstam, Tullio Regge, and Lev Landau hoped to reach a deeper understanding of fundamental physics.

If this sounds familiar, it should. Amplitudeologists like me view the physicists of the Analytic S-Matrix Program as our spiritual ancestors. Like us, they tried to skip the mess of Feynman diagrams, looking for mathematical tricks and unexpected symmetries to show them the way forward.

Unfortunately, they didn’t have the tools we do now. They didn’t understand the mathematical functions they needed, nor did they have novel ways of writing down their results like the amplituhedron. Instead, they had to work with what they knew, which in practice usually meant going back to Feynman diagrams.

Paradoxically then, much of the lasting impact of the Analytic S-Matrix Program has been on how we understand the results of Feynman diagram calculations. Just as psychologists learn about the Milgram experiment in school, we learn about Mandelstam variables and Regge trajectories. Recently, we’ve been digging up old concepts from those days and finding new applications, like the recent work on Landau singularities, or some as-yet unpublished work I’ve been doing.

Of course, this post wouldn’t be complete without mentioning the Analytic S-Matrix Program’s most illustrious child, String Theory. Some of the mathematics cooked up by the physicists of the 60’s, while dead ends for the problems they were trying to solve, ended up revealing a whole new world of potential.

The physicists of the 60’s were overly optimistic. Nevertheless, their work opened up questions that are still worth asking today. Much as psychologists can’t ignore what they got up to in the 60’s, it’s important for physicists to be aware of our history. You never know what you might dig up. 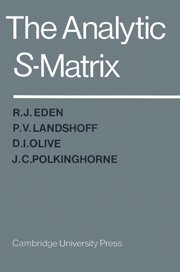 And as Levar Burton would say, you don’t have to take my word for it.

2 thoughts on “Those Wacky 60’s Physicists”