You might think of physics as the science of certainties and exact statements: action and reaction, F=ma, and all that. However, most calculations in physics aren’t exact, they’re approximations. This is especially true today, but it’s been true almost since the dawn of physics. In particular, approximations are performed via a method known as perturbation theory.

Perturbation theory is a trick used to solve problems that, for one reason or another, are too difficult to solve all in one go. It works by solving a simpler problem, then perturbing that solution, adjusting it closer to the target. 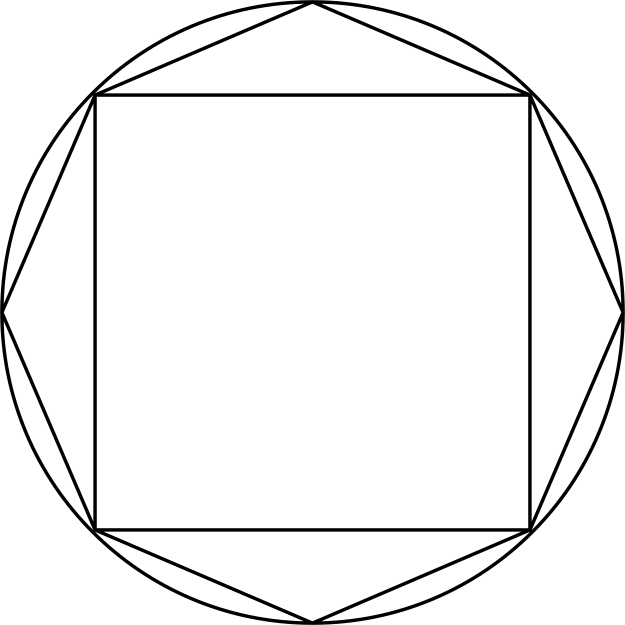 This, broadly speaking, is what’s going on when particle physicists talk about loops. The calculation with no loops (or “tree-level” result) is the easier problem to solve, omitting quantum effects. Each loop then is the next stage, more complicated but closer to the real total.

There are, as usual, holes in this analogy. One is that it leaves out an important aspect of perturbation theory, namely that it involves perturbing with a parameter. When that parameter is small, perturbation theory works, but as it gets larger the approximation gets worse and worse. In the case of particle physics, the parameter is the strength of the forces involves, with weaker forces (like the weak nuclear force, or electromagnetism) having better approximations than stronger forces (like the strong nuclear force). If you squint, this can still fit the analogy: different shapes might be harder to approximate than the circle, taking more sets of lines to get acceptably close.

Where the analogy fails completely, though, is when you start approaching infinity. Keep adding more lines, and you should be getting closer and closer to the circle each time. In quantum field theory, though, this frequently is not the case. As I’ve mentioned before, while lower loops keep getting closer to the true (and experimentally verified) results, going all the way out to infinite loops results not in the full circle, but in an infinite result instead. There’s an understanding of why this happens, but it does mean that perturbation theory can’t be thought of in the most intuitive way.

Almost every calculation in particle physics uses perturbation theory, which means almost always we are just approximating the real result, trying to draw a circle using straight lines. There are only a few theories where we can bypass this process and look at the full circle. These are known as integrable theories. N=4 super Yang-Mills may be among them, one of many reasons why studying it offers hope for a deeper understanding of particle physics.