When most people think of math, they think of the math they did in school: repeated arithmetic until your brain goes numb, followed by basic algebra and trig. You weren’t allowed to use calculators on most tests for the simple reason that almost everything you did could be done by a calculator in a fraction of the time.

Real math isn’t like that. Mathematicians handle proofs and abstract concepts, definitions and constructions and functions and generally not a single actual number in sight. That much, at least, shouldn’t be surprising.

What might be surprising is that even tasks which seem very much like things computers could do easily take a fair bit of human ingenuity.

In physics, I do a lot of integrals. For those of you unfamiliar with calculus, integrals can be thought of as the area between a curve and the x-axis.

Areas seem like the sort of thing it would be easy for a computer to find. Chop the space into little rectangles, add up all the rectangles under the curve, and if your rectangles are small enough you should get the right answer. Broadly, this is the method of numerical integration. Since computers can do billions of calculations per second, you can chop things up into billions of rectangles and get as close as you’d like, right? 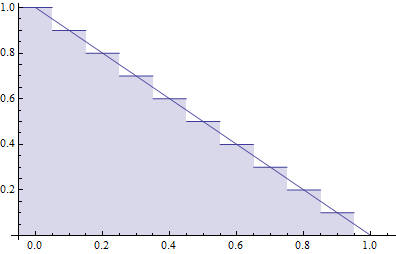 For some curves, this works fine. For others, though…

See how the left side of that plot goes off the chart? That curve goes to infinity. No matter how many rectangles you put on that side, you still won’t have any that are infinitely tall, so you’ll still miss that part of the curve.

Surprisingly enough, the area under this curve isn’t infinite. Do the integral correctly, and you get a result of 2. Set a computer to calculate this integral via the sort of naïve numerical integration discussed above though, and you’ll never find that answer. You need smarter methods: smart humans doing the math, or smart humans programming the computer.

Another way this can come up is if you’re adding up two parts of something that go to infinity in opposite directions. Try to integrate each part by itself and you’ll be stuck.

But add them together, and you get something quite a bit more tractable.

Numerical integration, and computers in general, are a very important tool in a scientist’s arsenal. But in order to use them, we have to be smart, and know what we’re doing. Knowing how to use our tools right can take almost as much expertise and care as working without tools.

So no, I can’t just tell the computer to do it.

1 thought on “Numerics, or, Why can’t you just tell the computer to do it?”