I’m in China this week, at the School and Workshop on Amplitudes in Beijing 2016. 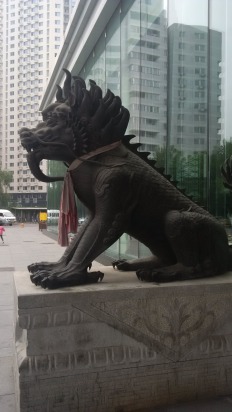 It’s a little chilly this time of year, so the dragons have accessorized

A few years back, I mentioned that there didn’t seem to be many amplitudeologists in Asia. That’s changed quite a lot over just the last few years. Song He and Yu-tin Huang went from postdocs in the west to faculty positions in China and Taiwan, respectively, while Bo Feng’s group in China has expanded. As a consequence, there’s now a substantial community here. This is the third “Amplitudes in Asia” conference, with past years meeting in Hong Kong and Taipei.

The “school” part of the conference was last week. I wasn’t here, but the students here seem to have enjoyed it a lot. This week is the “workshop” part, and there have been talks on a variety of parts of amplitudes. Nima showed up on Wednesday and managed to talk for his usual impressively long amount of time, finishing with a public lecture about the future of physics. The talk was ostensibly about why China should build the next big collider, but for the most part it ended up as a more general talk about exciting open questions in high energy physics. The talks were recorded, so they should be online at some point.

3 thoughts on “Four Gravitons in China”