I’m at the Perimeter Scholars International Winter School this week. Perimeter Scholars International is Perimeter’s one-of-a-kind master’s program in theoretical physics, that jams the basics of theoretical physics into a one-year curriculum. We’ve got students from all over the world, including plenty of places that don’t get any snow at all. As such, it was decided that the students need to spend a week somewhere with even more snow than Waterloo: Musoka, Ontario.

A place that occasionally manages to be this photogenic

This isn’t really a break for them, though, which is where I come in. The students have been organized into groups, and each group is working on a project. My group’s project is related to the work of integrability master Pedro Vieira. He and his collaborators came up with a way to calculate scattering amplitudes in N=4 super Yang-Mills without the usual process of loop-by-loop approximations. However, this method comes at a price: a new approximation, this time to low energy. This approximation is step-by-step, like loops, but in a different direction. It’s called the Pentagon Operator Product Expansion, or POPE for short. 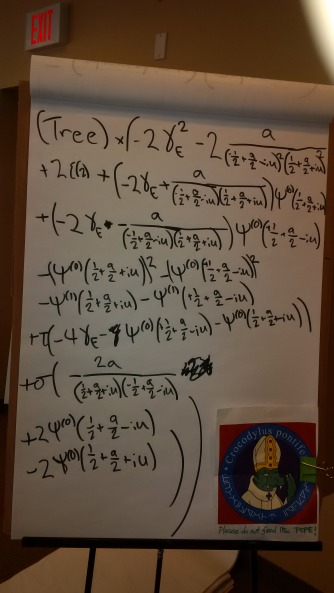 Approach the POPE, and receive a blessing

What we’re trying to do is go back and add up all of the step-by-step terms in the approximation, to see if we can match to the old expansion in loops. One of Pedro’s students recently managed to do this for the first approximation (“tree” diagrams), and the group here at the Winter School is trying to use her (still unpublished) work as a jumping-off point to get to the first loop. Time will tell whether we’ll succeed…but we’re making progress, and the students are learning a lot.