String theory may sound strange and exotic, with its extra dimensions and loops of string. Deep down, though, string theory is by far the most conservative attempt at a theory of quantum gravity. It just takes the tools of quantum field theory, and applies them all over again.

Picture a loop of string, traveling through space. From one moment to the next, the loop occupies a loop-shaped region. Now imagine joining all those regions together, forming a tunnel: the space swept out by the string over its entire existence. As the string joins other strings, merging and dividing, the result is a complicated surface. In string theory, we call this surface the worldsheet.

Imagine what it’s like to live on this two-dimensional surface. You don’t know where the string is in the space around it, because you can’t see off the surface. You can learn something about it, though, because making the worldsheet bend takes energy. I’ve talked about this kind of situation before, and the result is that your world contains a scalar field. 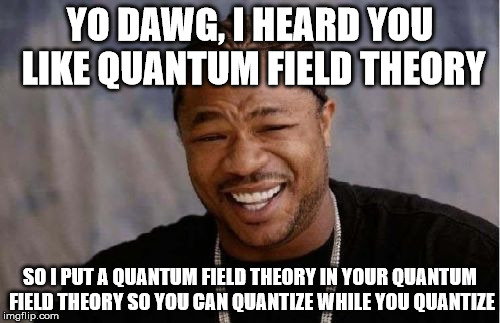 Xzibit would be proud.

If you understand this aspect of string theory, everything else makes a lot more sense. If you’re just imagining lengths of string, it’s hard to understand how strings can have supersymmetry. In these terms, though, it’s simple: instead of just scalar fields, supersymmetric strings also have fermions (fields with spin 1/2) as part of their two-dimensional quantum field theory.

It’s also deeply related to all those weird extra dimensions. As it turns out, two-dimensional quantum field theories are much more restricted than their cousins in our four (three space plus one time)-dimensional world. In order for a theory with only scalars (like the worldsheet of a moving loop of string) to make sense, there have to be twenty-six scalars. Each scalar is a direction in which the worldsheet can bend, so if you just have scalars you’re looking at a 26-dimensional world. Supersymmetry changes this calculation by adding fermions: with fermions and scalars, you need ten scalars to make your theory mathematically consistent, which is why superstring theory lives in ten dimensions.

Sticking a quantum field theory inside a quantum field theory is the most straightforward way to move forward. Fundamentally, it’s just using tools we already know work. That doesn’t mean it’s the right solution, or that it describes reality: that’s for the future to establish. But I hope I’ve made it a bit clearer why it’s by far the most popular option.

7 thoughts on “Yo Dawg, I Heard You Liked Quantum Field Theory so I Made You a String Theory”