I tend to be skeptical of attempts to apply metaphysics to physics. In particular, I get leery when someone tries to describe physics in terms of which fundamental things exist, and which things are made up of other things.

Now, I’m not the sort of physicist who thinks metaphysics is useless in general. I’ve seen some impressive uses of supervenience, for example.

But I think that, in physics, talk of “things” is almost always premature. As physicists, we describe the world mathematically. It’s the most precise way we have access to of describing the universe. The trouble is, slightly different mathematics can imply the existence of vastly different “things”.

To give a slightly unusual example, let’s talk about card games. 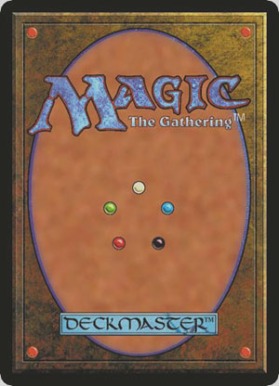 To defeat metaphysics, we must best it at a children’s card game!

Magic: The Gathering is a collectible card game in which players play powerful spellcasters who fight by casting spells and summoning creatures. Those spells and creatures are represented by cards.

If you wanted to find which “things” exist in Magic: The Gathering, you’d probably start with the cards. And indeed, cards are pretty good candidates for fundamental “things”. As a player, you have a hand of cards, a discard pile (“graveyard”) and a deck (“library”), and all of these are indeed filled with cards.

However, not every “thing” in the game is a card. That’s because the game is in some sense limited: it needs to represent a broad set of concepts while still using physical, purchasable cards.

Suppose you have a card that represents a general. Every turn, the general recruits a soldier. You could represent the soldiers with actual cards, but they’d have to come from somewhere, and over many turns you might quickly run out.

Instead, Magic represents these soldiers with “tokens”. A token is not a card: you can’t shuffle a token into your deck or return it to your hand, and if you try to it just ceases to exist. But otherwise, the tokens behave just like other creatures: they’re both the same type of “thing”, something Magic calls a “permanent”. Permanents live in an area between players called the “battlefield”.

And it gets even more complicated! Some creatures have special abilities. When those abilities are activated, they’re treated like spells in many ways: you can cast spells in response, and even counter them with the right cards. However, they’re not spells, because they’re not cards: like tokens, you can’t shuffle them into your deck. Instead, both they and spells that have just been cast live in another area, the “stack”.

So while Magic might look like it just has one type of “thing”, cards, in fact it has three: cards, permanents, and objects on the stack.

We can contrast this with another card game, Hearthstone.

Hearthstone is much like Magic. You are a spellcaster, you cast spells, you summon creatures, and those spells and creatures are represented by cards.

The difference is, Hearthstone is purely electronic. You can’t go out and buy the cards in a store, they’re simulated in the online game. And this means that Hearthstone’s metaphysics can be a whole lot simpler.

In Hearthstone, if you have a general who recruits a soldier every turn, the soldiers can be cards just like the general. You can return them to your hand, or shuffle them into your deck, just like a normal card. Your computer can keep track of them, and make sure they go away properly at the end of the game.

This means that Hearthstone doesn’t need a concept of “permanents”: everything on its “battlefield” is just a card, which can have some strange consequences. If you return a creature to your hand, and you have room, it will just go there. But if your hand is full, and the creature has nowhere to go, it will “die”, in exactly the same way it would have died in the game if another creature killed it. From the game’s perspective, the creature was always a card, and the card “died”, so the creature died.

These small differences in implementation, in the “mathematics” of the game, change the metaphysics completely. Magic has three types of “things”, Hearthstone has only one.

And card games are a special case, because in some sense they’re built to make metaphysics easy. Cards are intuitive, everyday objects, and both Magic and Hearthstone are built off of our intuitions about them, which is why I can talk about “things” in either game.

Physics doesn’t have to be built that way. Physics is meant to capture our observations, and help us make predictions. It doesn’t have to sort itself neatly into “things”. Even if it does, I hope I’ve convinced you that small changes in physics could lead to large changes in which “things” exist. Unless you’re convinced that you understand the physics of something completely, you might want to skip the metaphysics. A minor mathematical detail could sweep it all away.

4 thoughts on “The Metaphysics of Card Games”